Local Aboriginal communities represent a significant source of current and potential employees, local business procurement, and traditional environmental knowledge. Effective engagement and productive consultation impacts every aspect of our operation, now and into the future.

A long-term strategy is being developed that will reduce water containment on our site and reduce the import of fresh water for our operations. While we did not meet our water use target for 2013 due to increased demand in our extraction facilities, overall import was lower than the previous year and use of recycled water was higher.

Syncrude recognizes local First Nations and Métis people as among the most significant communities of interest impacted by our business. We operate on the traditional lands of five First Nations and, since our earliest days, have worked to accommodate their interests, as well as those of the Métis Locals, wherever possible.

Our aim is to support Aboriginal communities through relationship-building and formal agreements that are aligned with our mutual interests, mitigate concerns, provide benefit to affected communities, and are in accord with Canadian law. Toward this, our Aboriginal Relations policy clearly defines our engagement principles, with a focus on sharing opportunities through employment, business development, community-guided investment, effective engagement and consultation, and environmental programs.

A steering committee comprised of executives, senior management and advisors meets quarterly to steward our commitments and guide strategies to ensure positive outcomes for local Aboriginal communities. An Aboriginal Relations team supports the committee, and manages the day-to-day engagement and relationships.

Syncrude’s policies pertaining to our relationships with Aboriginal communities are incorporated into our overarching Communications and Stakeholder Relations Policy and Consultation Principles. As well, Syncrude manages all external relationships through its Operations Integrity Management System (OIMS), with performance assessments conducted regularly. Performance is also measured against the Aboriginal and Community Outreach Protocol under the Mining Association of Canada’s Towards Sustainable Mining (TSM) initiative. In 2013, we were externally verified at the top level of performance for the protocol.

Our engagement with those affected by our operations is ongoing, and in specific cases is triggered by regulatory applications that fall under Canadian and Alberta law, under which Syncrude has been delegated the procedural aspects of consultation. The list of Acts and regulations Syncrude stewards to can be found on our website.

Syncrude’s operations are located solely in Alberta and we have no foreign or international sites. We abide by the laws and regulations of the Government of Canada, which in 2010 endorsed in principle the United Nations Declaration on the Rights of Indigenous Peoples, and we support the constitutional right of Aboriginal people to be consulted as delegated by the Crown. Consultation occurs regularly and directly on key projects and issues of concern. In addition, engagement occurs regularly through face-to-face meetings, community presentations and tours. Other feedback mechanisms include a community hotline where concerns are recorded, tracked and responded to appropriately.

In 2013, consultation continued on the proposed Mildred Lake Extension (MLX) project. This included discussions related to a bridge over the MacKay River, the design of which will not impede area wildlife corridors. Concerns were raised regarding the possibility of oil sand material falling from heavy haulers into the river, and this issue will be reviewed in later design stages. Consultation regarding the incorporation of Traditional Land Use (TLU) studies and Traditional Environmental Knowledge (TEK) into the project’s environmental impact assessment will take place in 2014. Other issues raised included tailings management and reclamation and closure. Project scoping continues and we anticipate filing a formal regulatory application in late 2014.

The neighbouring First Nation and Métis community of Fort McKay expressed concerns in early 2013 regarding vibrations felt from mine blasting activities. Blasting occurs in the winter in order to release frozen oil sand and enable easier excavation. Syncrude staff met with community leaders to discuss procedures and we agreed to provide advance notice of at least 48 hours for any future blasting.

Winter drilling occurs each year to assess ore depth and quality on future mining areas. Meetings are held with those who own traplines in the impacted area and affected First Nations. Schedule and location are discussed, as well as any access issues. To minimize disturbance, existing roads and laydown areas are used wherever possible. Drilling fluids are collected in above-ground portable tanks which are then transported to facilities at our Mildred Lake site for proper disposal; drip trays are placed under equipment to capture potential leaks. All sites are reclaimed after drilling is complete.

Other consultation activities included tours of our operations and reclamation sites with advisory groups from First Nations and Métis communities.

Consultation occurred with Métis Local 1935 during the year regarding the renewal of our Good Neighbour Agreement. The Métis Local has expressed concerns about the environmental and socio-economic impacts of industrial development in the region and identified key areas of commitment they would like supported. These include: cultural centre development, Traditional Land Use (TLU) and occupancy research, education, cultural retention, Elder and youth programs, business and employment opportunities, capacity funding, consultation process funding, environmental impact management, and access management. Syncrude agreed to work with the Métis Local to understand and address these key areas of concern, with the agreement being signed in mid-2014.

The potential health and environmental impacts of oil sands development are of great concern to people living and working around oil sands projects, including several regional Aboriginal communities. While air monitoring studies to date have not linked oil sands development to human health issues, we understand the communities’ concerns and agree this is an area that must undergo further study.

We believe oil sands development must happen in a way that ensures the health and safety of our employees and communities, and benefits their overall quality of life. To that end, we continue to work directly with industry partners, the Alberta government and Aboriginal communities to collect, monitor and share data that is critical to current and future regional health studies. A community-led study is currently underway for neighbouring Fort McKay.

In 1993, Syncrude, in consultation with the Fort McKay First Nation, introduced a small herd of wood bison into a reclaimed area to assess the capability of the landscape to support large mammals, such as ungulates. Today, the herd has grown to approximately 300 head which graze on 300 hectares of land at the Beaver Creek Wood Bison Ranch. The herd is managed cooperatively with the First Nation and is recognized across North America for its health and disease-free status. Each year, the First Nation holds a harvest of select animals to bring Elders and youth together. Meat is shared among community members.

An increased focus on identifying innovative business opportunities and integrating greater awareness within the procurement process led to a record high in Syncrude’s 2013 purchase of goods and services from Aboriginal companies. Total Aboriginal business volume was $186 million – an increase of 27 per cent over 2012. This brought total cumulative procurement to over $2 billion.

Our policy requires an Aboriginal business to be 51 per cent owned by a First Nation, Métis Local or Aboriginal person. The Aboriginal owner must also be in control of the operations on a day-to-day basis. 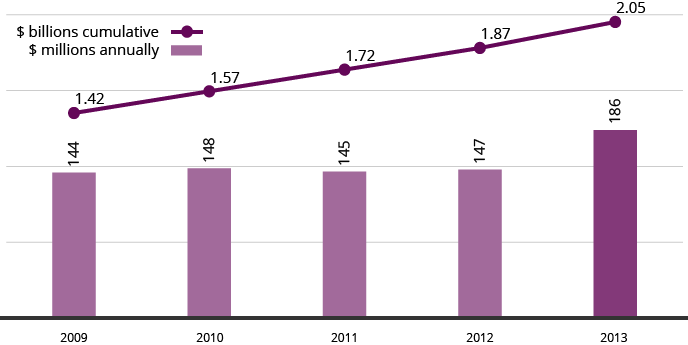 An Aboriginal employee network was established in 2013 to serve as a primary source of information and feedback on how well Syncrude is delivering on its commitments to First Nations and Métis communities, Syncrude’s reputation in those communities, and how effective our programs and activities are in meeting business objectives, such as recruitment and retention. The group also focuses on raising the awareness of Aboriginal culture within the Syncrude workforce and, in 2013, organized the first-ever Aboriginal Awareness Day at our Mildred Lake site.

Syncrude invested more than $1 million in Aboriginal community projects during 2013. The projects or associations we supported included:

Information on Syncrude’s community investment program and funding guidelines can be found on our website.

As well, Syncrude was named the top workplace in Alberta for diversity in 2013. The recognition from the Alberta Venture Best Workplaces program cited our commitments to good relations, Aboriginal employment and business development.

Syncrude’s Aboriginal Review, published annually, provides a comprehensive overview of our Aboriginal relations work and our progress in stewarding to our key commitment areas. Called Pathways, the review has been recognized internationally with a MarCom Platinum Award and a Gold ARC Award recognizing the world’s best annual reports. View Pathways here.

Go to PDF Builder
← Back to Social Main